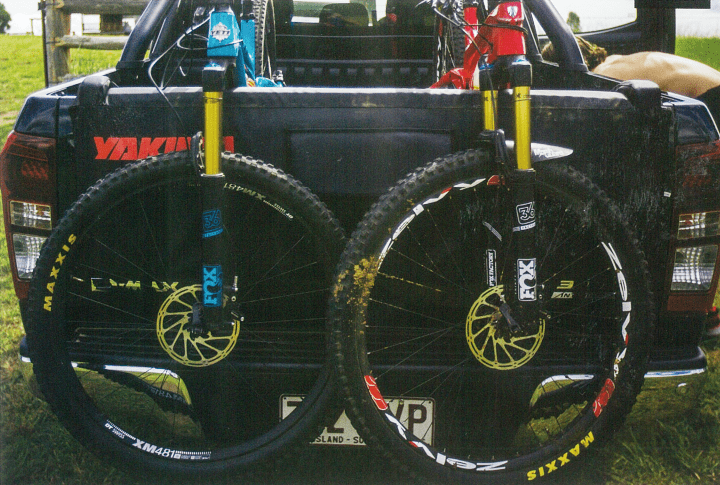 That’s where the Yakima Crashpad comes in. Pull in to any trailhead carpark and you’ll see people using a whole range of methods for carrying their bikes to the trail. There are roof racks with the front wheel on, or off. Or the tetris option of fitting bikes and gear in the back of the car - sometimes this game is more complex with smaller cars and more riders. There are hitch mount racks, older style top-tube clamping racks, and of course the questionable occy strap to plain old roof bars. Don’t laugh, it gets seen more often than you’d think.

But with a whole tray to use, one of the easiest options is to just lob your bike in with both wheels on. Products like the Yakima Crashpad fit securely over the back of the tray, padding both the bike and your tailgate from damage.

Fitting the Crashpad
This was easy. With a few straps the high-density foam of the Yakima Crashpad wraps over just about any tailgate and the ballistic nylon means the foam will last for a long time too. There’s a flap to get to the latch, and the fit is secure. It would be good if it was a little easier to take off and refit, as not everyone will want to show their mountain bike pride with their ute the whole time.

Lock and Load - Sort of
All that’s left to do once the crash-pad is fitted is load your bikes in. The tailgate fits neatly between the fork and downtube. With the bars turned 90 degrees. It’s a really solid fit. And you should be able to get three or maybe four bikes in. There is a little bit of rub on the bikes, and it’s more likely to be between the bikes - which you can avoid by placing some old camping mats in between them. Just tie them in so they don’t fly away!

One downside is the inability to strap the bikes into place. This is mostly for peace of mind as the bikes don’t shift once we put them down. Other products do have tie-down straps, and we felt they would be a good addition here.

Our only other concern was with closing the tailgate. This was a one-off, but some part of the Crashpad interfered with the latch, and it resulted in a tangle of factory Yetis sliding down the road at about 80km/h. User error was to blame, but it does highlight the fact that mounting the bikes safely in the tray and making sure the tailgate itself is closed securely is up to you - as it’s an integral part of the security of the carrying system, and of protecting other motorists. That’s regardless of whether you have bikes on the tailgate or anything else in the tray!

A Neat Solution
Yakima claim the Crashpad is a ‘hassle free’ way to load bikes into the tray of a ute. And I agree wholeheartedly. We put hard-tails, all-mountain bikes, cross-country bikes, and even road and cyclocross bikes over the tray with no issues with mounting or stability. It really is a hassle free way to take your bike to the trails. But for long trips or on rougher roads, the peace of mind of being able to strap the downtube to the pad would be a nice addition.

HITS:
• Simple to use
• Good value
• Protects your car on your bike

MISSES
• Not easy on/easy off
• No tie down option